Adam and Eve After the Pill

Secular and religious thinkers agree: the sexual revolution is one of the most important milestones in human history. Perhaps nothing has changed life for so many, so fast, as the severing of sex and procreation. But what has been the result? – keep reading
BUY
magyar kiadás
edición en español
Wydanie polskie 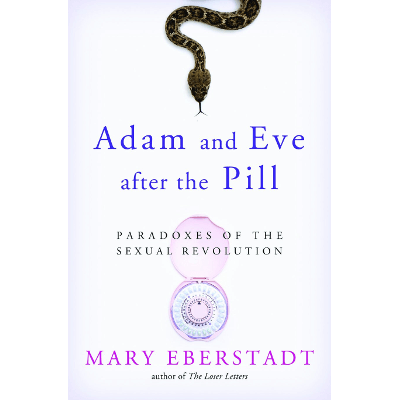 “Brilliant, serious work of the kind we’ve needed for decades.”

“I recommend her excellent book to anyone who cares about the major moral issue of our time.”

"Adam and Eve after the Pill is another brilliant and biting commentary on contemporary culture by the author of The Loser Letters....Eberstadt is a gifted writer with a vast sweep of knowledge and resources that are all marshaled in her argumentation....a very intellectual exercise, a must read."

This ground-breaking book by noted essayist and author Mary Eberstadt contends that sexual freedom has paradoxically produced widespread discontent. Drawing on sociologists Pitirim Sorokin, Carle Zimmerman, and others; philosopher G.E.M. Anscombe and novelist Tom Wolfe; and a host of feminists, food writers, musicians, and other voices from across today’s popular culture, Eberstadt makes her contrarian case with an impressive array of evidence. Her chapters range across academic disciplines and include supporting evidence from contemporary literature and music, women’s studies, college memoirs, dietary guides, advertisements, television shows, and films.

Adam and Eve after the Pill examines as no book has before the seismic social changes caused by the sexual revolution. In examining human behavior in the post-liberation world, Eberstadt provocatively asks: Is food the new sex? Is pornography the new tobacco?

Adam and Eve after the Pill will change the way readers view the paradoxical impact of the sexual revolution on ideas, morals, and humanity itself.