Why I Turned Right

Political vicissitudes aside, with or without a conservative administration, whether or not America is engaged in war, or regardless of who next holds the majority either in Congress or the Court, the United States as a whole (as the infamous red and blue map made unforgettably clear) has boldly, unabashedly moved Right. But the question remains: Why? – keep reading
BUY 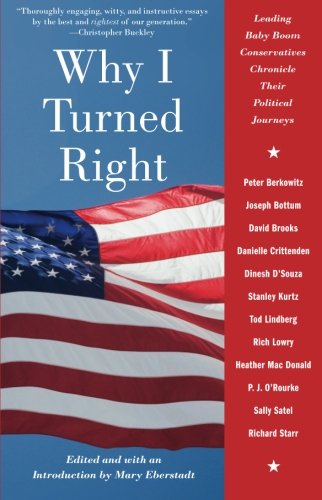 “As a Christian humorist, Mary Eberstadt is the rightful heir and assignee of C.S. Lewis.”

“Makes a provocative, compelling case with rare grace and conviction.”

How did a movement that appeared so sidelined and embattled only a generation ago emerge as such a strong, influential, and enduring united front?

In Why I Turned Right, eminent and rising conservatives — at odds themselves on a number of issues from religion, family, sex, to stem cell research, abortion, and war — answer the question. And they answer it not through polemic, reactionary preaching, or rage, but in the most practical and sensible way possible: via the sharp, critical, and unfiltered voices and canny observations of uniquely positioned authors, editors, humorists, and political refugees inadvertently born of the sexual revolution and the PC movement, who ultimately landed on the conservative side of America’s red-blue divide — in some cases, much to their own surprise.

A fascinating intellectual journey, this “family of opinions,” as contributor Peter Berkowitz terms it, represents the extraordinarily varied paths that have led these authors from the championed liberalism of their youth to eventually fuel the world of conservative think tanks, magazines, blogs, and book publishing.

Whether you are for the Right or against, guarded supporter or puzzled progressive, Why I Turned Rightproves an entertaining, enlightening, and edifying read for anyone with an open mind — both the red and the blue, and everyone in between.